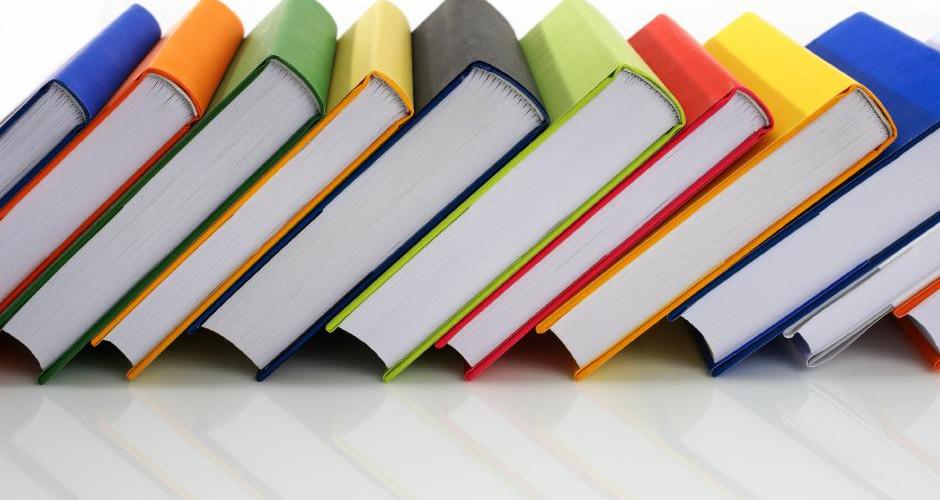 The glorious days when communication among producers and consumers was unhampered are gone. Nowadays companies need to engage in opinion climate change in order to be successful.

For many years, Public Partners was an agency for public relations, networking and business consultancy. Together with companies and free-market think tanks, we organised and hosted conferences, seminars and other events in Germany and throughout Europe.

Today, he concentrates on scientific publications and translations.

Bratislava, 20 November 2012. Slovak TV station TA3 interviewed Professor Hardy Bouillon about social justice, euro crisis and ECB. The live interview can be downloaded from the TV archives: http://www.ta3.com/clanok/1009883/host-v-studiu-h-bouillon-o-tom-preco-socialna-spravodlivost-nie-je-spravodliva.html.
The interview was preceded by a lecture Professor Bouillon gave the night before on invitation by the Bratislava based Conservative Institute. Topic: Why social justice is not just. Lecture as well as interview can be downloaded from the institute's homepage: http://www.institute.sk/article.php?4578

New Direction Foundation (http://newdirectionfoundation.org) is a free-market Think Tank in Brussels, closely associated with the European Conservatives and Reformist Group. Professor Bouillon joined New Direction in November 2011 and left in 2015. In his position as Deputy Director, he oversaw the commissioned studies of New Direction. 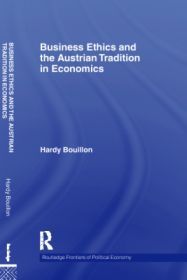 Professor Hardy Bouillon wrote a new book on business ethics. It is published by Routledge. Business Ethics and the Austrian Tradition in Economics is a treatise on the fundamental questions of business ethics and addresses significant shortcomings in the field. It is the result of correlating reflections on phenomena, resulting from an intersection of ethics, economics, methodology, and political and social philosophy. Sparked by the business ethicists’ tendency to consider certain areas outside their field and accept others unquestioningly, this book provides answers in the tradition of Austrian Economics and, in particular, of Hayek and Popper. For more see: http://www.routledge.com/books/details/9780415600255/. Or order at:
http://www.amazon.de/Tradition-Economics-Routledge-Frontiers-Political/dp/0415600251/ref=sr_1_14?ie=UTF8&qid=1295883326&sr=8-14

Hardy Bouillon has been a Fellow of the International Centre for Economic Research (ICER) in Turin in 2009. He used his three months fellowship for methodological studies in business ethics. More at http://www.icer.it/menu/f_fellows.html

In summer 2009, Hardy Bouillon served as Hayek Institute Endowed Guest Professor at the Vienna University of Economics and Business. It is the second time after 2005 that Bouillon became invited to serve in this position. "The Hayek Endowed Professors are internationally renowned scholars placed on a rotating basis in one of Austria&#039;s universities to teach in the tradition of the Austrian School of Economics, with an emphasis on the ideas of F.A. v. Hayek and public choice", says the Hayek Institute. For more see: http://www.hayek-institut.at/index.php?popup=0&id=18

Professor Bouillon one of the judges of Hayek Essay Contest

Hardy Bouillon named Extracurricular Professor at the University of Trier

On February 19, 2008, Hardy Bouillon was named Extracurricular Professor at the University of Trier.

Hardy Bouillon Stand-In-Professor at the University of Duisburg-Essen

Hardy Bouillon continued serving as Stand-In-Professor for Practical Philosophy at the University of Duisburg-Essen during winter term 2008/9. He stood in for Professor Hartmut Kliemt who was on a sabbatical leave.

Hayek Foundation Guest Professorship at the University of Salzburg

On January 26, 2006, Dr. Hardy Bouillon, Chairman of Public Partners, concluded his Hayek Endowed Professorship at the University of Salzburg with a public lecture. The topic was: Hayek on knowledge and acting. His lecture was preceded by a speech of EU-Commissioner Dr. Benita Ferrero-Waldner (left) and introductions by Professor Heinrich Schmidinger, President of Salzburg University, Professor Kurt Schmoller, Dean of the Law Faculty, Bergat Josef Wöhrer, President of Salzburg Industrial Association, and Christoph Kraus, Vice-President of the Hayek Institute. Venue: Hörsaal 230, Kapitelgasse 5-7; 6:00 p.m.

Hardy Bouillon served as Hayek Foundation Guest Professor at the University of Salzburg during summer term 2005. The endowed Hayek Chair was previously taken by Professors Christian Watrin, Viktor Vanberg, Karen Vaughn and Charles Blankart. More details: http://www.hayek-institut.at and http://wwwdb.sbg.ac.at/lvvz/lva.asp?rv=280&rb=349&sem=&subm=anzeigen.
Thus, Hardy Bouillon keeps up his function as guest professor at European universities. In 2004 he had lectured at Prague University of Economics.

Guestprofessorship at the University of Zagreb

In Winter term 2005/2006 Dr. Hardy Bouillon served as Guest Professor at the University of Zagreb. He was asked to lecture business ethics as part of the PhD program at the Graduate School of Economics and Business.

Tblisi, September 8, 2005
Missing legal structures and insecure property rights are the main problems of Georgia’s economy, say Paata Shesheldze and his colleagues at the Tblisi-based New School of Economics Georgia (NSEG). Together with the Friedrich Naumann Foundation (FNF), NSEG had invited Hardy Bouillon to discuss these and other economic issues and to present the Annual Report 2005 of the Economic Freedom of the World Index, published by the Fraser Institute. When it comes to „legal structures & security of property rights“ we have got only 2,6 out of 10 possible points, Sheshelidze pointed out. "Capitalist socialism" has several faces. While it is government size and high taxation in Western democracies, it is insecure property rights in other parts of the world, said Hardy Bouillon in his keynote speech. 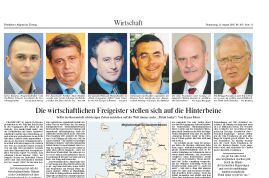 On 11 August 2005, economics editor Dr. Karen Horn reported in the Frankfurter Allgemeine Zeitung on the growing influence of European Think Thanks. She emphasized the pivotal role of Pierre Garello, Universität Aix-Marseille III, and Hardy Bouillon, Centre for the New Europe, in establishing the Annual European Resource Bank Meetings and described other important network activities in Europe. (For full text in English see page bottom: The free-marketeers rise up.)

Lobbying for freedom by Hardy Bouillon

taken from http://www.riskoffreedom.com/issue.php?issue=39&article=123, online published in issue 24 of

Germany has been treated to a debate about the supposed ‘bad guys’ of capitalism. This debate has been steered by the SPD Chairman, Franz Muentefering, who baptised British and American investors ‘locusts’, employing a vocabulary that he formerly dismissed as Nazi verbiage. For some people this debate has been a welcome prelude to the search for more bad guys, and the lobbyists are now being singled out, on account of actions which, though perhaps morally blameworthy, belong nevertheless within the legal rules of the game.
To understand and cast judgement on this game, we must first remember that the investor and the lobbyist play by different rules. The investor might buy corporate conglomerates, take them apart, close factories, keep some and sell others. His critics may (mistakenly) accuse him of destroying skills and jobs, whereas in fact he does nothing else than what the market requires, liquidating what has survived so far because of unfair subsidies and, perhaps, poor management. He is not so much destroying skills and jobs as helping the market to relocate them. He is performing the needed shakeout: probably a well-paid job, but not one that attracts much public sympathy.
Lobbying probably receives more sympathy, though it hardly deserves it. Recently a well-meaning colleague asked me what free-market think-tanks like mine are, if not lobbyists. Like the lobbying companies that work for the corporations, he suggested, we are in the business of supporting or opposing legislation through the back door of influence, rather than the front door of the vote. True, I replied; think-tanks and lobbyists are both trying to influence legislation. But they differ in a decisive respect. Lobbyists aim to change legislation in the interest of a particular group; if they are successful, therefore, they promote discrimination (whether of a positive or a negative kind). Free-market think-tanks have the opposite purpose, which is to promote legislation that does not allow for economic discrimination of any kind at all.
Lobbyists and politicians may coalesce, in order to promote discriminatory legislation. We may find this morally objectionable; but it is both legally permissible and an expected feature of the political process. It is still up to politicians to vote as their conscience directs. Lobbyists can influence the result by providing information and a network of responses, but they do not infringe the privacy or the freedom of the politicians themselves. They are forbidden to coerce or to bribe, and the freedom of the politician to vote as he decides is the tacit premise of the whole arrangement.
‘It is worse to condone a crime than to commit it.’ Whatever one might think of that proverb, it is true only in its moral interpretation and not as a matter of law. We might disapprove of lobbying on moral grounds, since it condones harmful (i.e. discriminatory) laws and seduces politicians to promote them. However, lobbying has to be accepted as part of the democratic process, and it is for the democratic process to set the rules. If you don’t like the result, then lobby to change it. 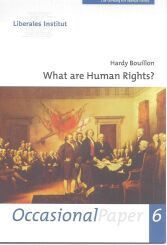 What are human rights? by Hardy Bouillon is published by the German Friedrich Naumann Foundation as Occasional Paper 6, 2005, 19 pgs.
"There are no human rights which are not also property rights", Bouillon says.
Copies can be ordered at: http://www.fnst.org/webcom/show_publikationen.php/_c-468/_k-16/i.html

Vita and Publications of Hardy Bouillon

Hardy Bouillon is Extracurricluar Professor of Philosophy at the University of Trier, Germany, where he teaches since 1988. He also served as Head of Academic Affairs for The Centre for the New Europe, a free-market think tank based in Brussels, and several other institutions. He has studied at Albuquerque, NM, Oxford, England, and Trier, where he lives with his wife Jana and their children Jan Bodo and Pauline.

Over the years, Hardy Bouillon has published in German, English, Turkish, Chinese, Romanian, and Vietnamese. His publications include 140 odd papers and the following books.